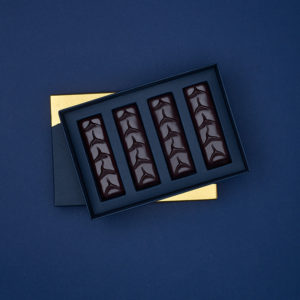 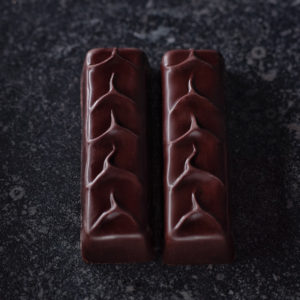 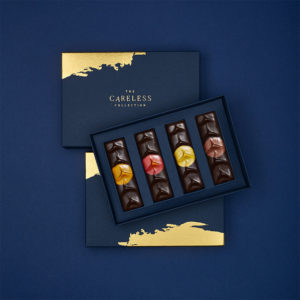 Careless Vegan, four bars of luxury filled vegan chocolate. All encased in Nacional cocoa, the most sought after in the world. The collection comprises of four uniquely created bars.

All the bars are lovingly made, each with a unique filling with flavour profiles that beautifully pair with the main chocolate shell. The freshly tempered chocolate shells are made with exacting specifications to bring out the finest texture and appearance of the chocolate. Each bar is completed with an opulent filling, using David’s concocted recipes. A truly artisan product.

Nacional Cocoa:
The Nacional is a rare variety of cocoa bean found in areas of South America such as Ecuador and Peru. Some experts in the 21st century had formerly considered the Nacional bean to be extinct. The Ecuadorian cacao variety called “Nacional” traces its genetic lineage as far back as 5,300 years, to the earliest-known cacao trees domesticated by humanity. In the 18th and 19th centuries Nacional was considered by many European chocolatiers to be the most coveted source of cacao in the world because of its floral aroma and complex flavour profile. This was the golden era of Ecuadorian cacao, but it came to an abrupt end in 1916, when an outbreak of “Witches’ Broom” disease decimated the Nacional variety throughout the country.

By the beginning of the 21st century most people believed that the pure Nacional genotype no longer existed.[6][5] In 2009, Ecuador’s agricultural research institute collected DNA samples from cacao trees throughout Ecuador, only 6 trees (out of 11,000 samples tested) were confirmed to be 100% genetically pure Nacional cacao. That is only 0.05% of the cacao trees that INIAP analysed in their field research. In 2013 groves of 100-120 year old cocoa trees were discovered by To’ak Chocolate in the valley of Piedra de Plata located in the mountains of the Arriba cacao-growing region of Ecuador in the province of Manabi. With the help of the Heirloom Cacao Preservation fund (HCP), along with Freddy Amores, the director of INIAP, and Dr. Lyndel Meinhardt with the USDA-ARS, To’ak ran DNA tests on a small sample size of these trees. Of the sixteen old arbor trees tested, nine of them proved to be genetically pure Nacional variety. DNA analysis confirmed that the beans were comprised purely of the Nacional genotype bringing the number of DNAverified pure Nacional trees in Ecuador to a grand total of fifteen.

There are no reviews yet.

Only logged in customers who have purchased this product may leave a review. 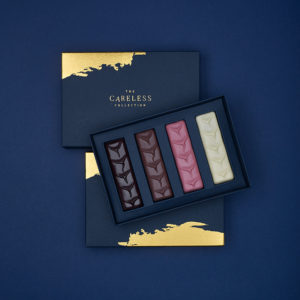 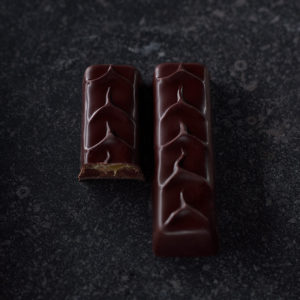 Add to Wishlist
Quick View
Sorry out of stock

You can find out more about which cookies we are using or switch them off in settings.

This website uses cookies so that we can provide you with the best user experience possible. Cookie information is stored in your browser and performs functions such as recognising you when you return to our website and helping our team to understand which sections of the website you find most interesting and useful.

Strictly Necessary Cookie should be enabled at all times so that we can save your preferences for cookie settings.

If you disable this cookie, we will not be able to save your preferences. This means that every time you visit this website you will need to enable or disable cookies again.